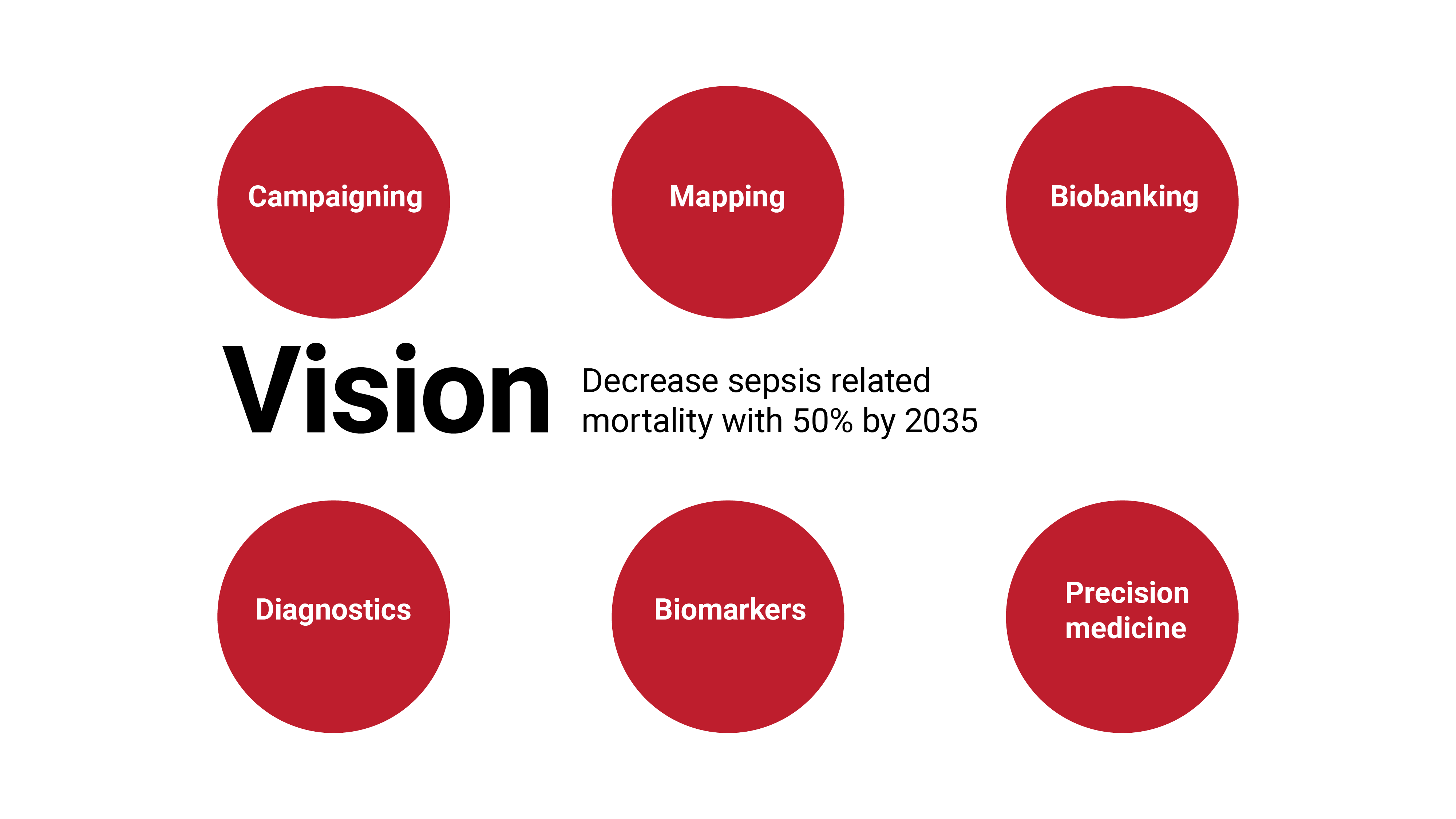 Sepsis is a life-threatening condition that occurs when the immune system overreacts to an infection. This relatively anonymous disease is more common in the community than the four most common cancers combined and has a higher mortality rate than acute myocardial infarction, which makes sepsis a significant challenge to human health. Patients with sepsis are treated with antibiotics, consequently the increasing prevalence of antibiotic resistance may have a disastrous impact if not acted upon. We propose CombatSepsis, a new ecosystem of participants with an interdisciplinary approach to stimulate innovation and provide solutions to major problem areas in sepsis. Our goal is to create a well-defined and sustainable strategy to reduce the mortality in sepsis with 50% by 2035.

At present, over 20 million people are affected by sepsis worldwide every year, where 6 million die in hospitals and another 5 million die within a year due to related complications. Importantly, since concrete diagnostic criteria are not available, these figures are probably underestimated. Among the approximately 10 million 1-year survivors, half will develop severe long-term complications. It is estimated that more than 40,000 adults are affected annually in Sweden, which is equivalent to at least 5,000 deaths per year. The WHO proposed a resolution on sepsis in 2017, which urged all member states to take action to increase awareness of sepsis and invest in the development of new diagnostic and treatment strategies.

Sepsis is not one disease but a highly variable and complex umbrella of diseases that encompasses a vastly heterogeneous patient group, analogous to the spectrum of cancer forms. Sepsis differs depending on site of infection, type of pathogen, time from infection and underlying systemic inflammatory response of the patient. These inherent differences have however not been detailed at the molecular level, and most importantly are not applied for diagnostic classification of patients into distinct therapeutic sub-groups of sepsis. Sepsis is characterized by several difficult-to-solve challenges and serious threats, which makes sepsis both a complex and imperative challenge for society:

A)The severe negative consequences of low awareness and low priority of sepsis
Sepsis is a relatively unknown disease/syndrome among the general public, underrecognized among health care professionals and consequently a low priority for healthcare innovation and clinical research. Sepsis is characterized by a highly dynamic immunological condition that causes time dependent immune and organ dysfunction. The distinct aspects of this syndrome are not reflected in the current hospital diagnostic criteria, where only 20-30% of sepsis cases are correctly coded. Furthermore, sepsis is easily confused with other diseases, which delays diagnosis and treatment.

B)The catastrophic consequences of antibiotic resistance for treatment of sepsis.
The success of modern medicine is to a large portion based on the use of antibiotics to prevent the infections that would otherwise be inevitable during surgery, transplantation and cancer treatments. Current strategies to combat antibiotic resistance are focused solely on the antibiotics and antibiotic stewardship without due focus on the infection process and the response networks within the patient´s immune defence. In the absence of successful treatment strategies for infections, the incidence of life-threatening sepsis will increase. For example, prior to the discovery of antibiotics, the mortality in pneumococcal sepsis was 80% as compared to 20% in Sweden today.

C)The Principle of “one-size fits all”
A 50-year history of over 100 failed clinical trials of anti-inflammatory strategies for the treatment of sepsis is most likely a result of conducting studies according to the erroneous principle of “one-size fits all”. In this paradigm, it is generally believed that the study population is highly homogenous, can be defined using unspecific symptom-based inclusion criteria and treated using a universal “magic-bullet” therapy. This one-size fits all paradigm is highly implausible for sepsis for the following reasons; A) the early symptoms of sepsis are highly unspecific, B) the underlying pathogen and associated bacterial virulence factors varies among different patient groups and pathogen detection is too slow, C) the underlying immune profile in patients is highly diverse and is as yet not included in diagnostic biomarker profiles. The outcome is that sepsis patients are highly heterogenous and currently inadequately stratified in clinical trials. Furthermore, a “magic bullet” treatment is unlikely to achieve clinical success in sepsis as multiple parallel molecular immune defence networks collaborate in the systemic inflammatory response, genesis of organ damage and long-term complications. Therefore, just as in modern treatment of cancer a multi component therapeutic intervention strategy, i.e. precision medicine, must be adopted to obtain optimal treatment outcome in sepsis.